JAG (the American Military acronym for Judge Advocate General) is an American adventure and legal drama television show with a distinct U.S. Navy theme, created by Donald P. Bellisario, and produced by Belisarius Productions in association with Paramount Network Television (now CBS Television Studios). The first season was co-produced with NBC Productions. It originally conceived as Top Gun meets A Few Good Men, were JAG was first aired on NBC for one season from September 23, 1995 to May 22, 1996 (after finishing 77th in the ratings), and then on CBS for nine additional seasons from January 3, 1997 to April 29, 2005.

In addition, 227 episodes were produced and the show was also seen in over 100 countries. Due to the show's popularity, the show entered syndication early in 1999 and it is still regularly repeated around the world.

JAG went to the spins-off series of NCIS, which in turn spun off NCIS: Los Angeles and NCIS: New Orleans.

The series follows the exploits of the Washington metropolitan area–based "judge advocates" (i.e. uniformed lawyers) in the Department of the Navy’s Office of the Judge Advocate General, who in the line of duty can prosecute and defend criminal cases under the jurisdiction of the Uniform Code of Military Justice (arising from the global presence of the U.S. Navy and the U.S. Marine Corps), conducting informal and formal investigations, advising on military operational law and other associated duties.

Akin to Law & Order, the plots from many episodes were often "ripped from the headlines" with portions of the plot either resembling or referencing recognizable aspects of actual cases or incidents; such as the USS Cole bombing ("Act of Terror" and "Valor"), the rescue of downed pilot Scott O'Grady ("Defensive Action"), the Cavalese cable car disaster ("Clipped Wings"), the USS Iowa turret explosion ("Into the Breech"), and the Kelly Flinn incident ("The Court-Martial of Sandra Gilbert").

While not part of the mission of its real-world counterpart, some of the main characters are at times also involved, directly and indirectly, in various CIA intelligence operations; often revolving around the recurring character, CIA officer Clayton Webb (played by Steven Culp). 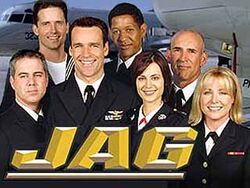 The final ensemble cast centers on Captain Harmon "Harm" Rabb, Jr., USN (David James Elliott), and Lt. Colonel Sarah "Mac" MacKenzie, USMC (Catherine Bell). Rabb was promoted to Captain in the second-to-last episode of the series. Rabb and Mac's obvious attraction to each other, which must not be allowed to interfere with their professional relationship, is a long-running thematic element.

Elliott played Harmon Rabb from the start of the series in 1995. Rabb's original partner in the pilot was Navy Lieutenant Caitlin Pike, played by Andrea Parker. She in turn left the series to star in The Pretender (she later returned as a guest star in three episodes), and was replaced by Tracey Needham as Lieutenant J.G. Meg Austin. Needham left the series in 1996 and was replaced by Catherine Bell from season 2 on.

Other members of the cast included Lieutenant Commander Bud Roberts, (played by Patrick Labyorteaux), first a PAO on the aircraft carrier USS Seahawk, then later a junior Judge Advocate at JAG. While on an assignment to the Seahawk, he met his future wife, Lieutenant Harriet Sims, played by Karri Turner, who would eventually come to be the administrative aide (from the Inspector General's Office (IG)), who held the office together. Bud's clumsiness, both physical and verbal, and geeky interests (he's a Trekkie, fascinated by the paranormal, and a computer nerd), together with his wife's maternal nature, were a frequent source of comic relief. His clumsiness was played down as the series went on. Bud lost the lower half of his right leg in Afganistan in the last episode of season 7, while attempting the heroic rescue of an Afghan boy playing in a mine field. For his actions, he received the Purple Heart and later was able to return to partial active duty with a prosthetic leg.

The actress Nanci Chambers, wife of David James Elliott, played Lieutenant Loren Singer. She portrayed this character as a loathsome villainess to great acclaim. Singer was consumed by her continual want to further her career at the expense of those around her. She often clashed with the other characters. Especially praised was an episode in which Singer hurt fan-loved Harriet by using the death of her baby Sarah to discredit her testimony in court. In a later episode, however, Harriet got a measure of revenge by punching out Singer (7.23 "In Country"). Singer was murdered, with suspicion falling on Rabb, who was eventually cleared (the two part story detailing the investigation into Singer's murder was used as the pilot for the spin off NCIS).

In 2005, David James Elliott announced he would leave the show to pursue other projects after not being offered a renewal from the producers. The show introduced new younger characters (including former As the World Turns star Chris Beetem) in an unsuccessful effort to stave off cancellation. Producers also thought about relocating the setting of the show to the Naval Base in San Diego, and even set a season ten episode there. Regardless, CBS announced the cancellation of the show after ten seasons on April 4, 2005. The final episode, "Fair Winds and Following Seas", which aired April 29, 2005, saw Harm and Mac assigned different stations: Harm in London, Mac in San Diego, California. They finally confront their feelings and decide to get married. The episode ends with them tossing a JAG challenge coin to decide who will give up their career to be with the other. However (in keeping with JAG tradition), we never see the outcome, as the screen fades to black the face of the coin is showing, which says: "JAG 1995–2005".

Collaboration with the military

The series depicts JAG officers, though heavily romanticized, applying the stipulations of the Uniform Code of Military Justice and international law as well as providing conventional television melodrama. In its initial phase, the show relied much on Hollywood military-prop suppliers and existing stock footage from other well-known naval and military films, including Top Gun, The Hunt for Red October, and Clear and Present Danger. The Department of Defense later recognized the series' as positive for its public image and therefore granted official support, providing the producers access to military installations and equipment. It is so far the only television show to have been officially endorsed by both the United States Navy and the United States Marine Corps. From the beginning, the show regularly incorporated elements of real-life military actions into its storylines, e.g. the aftermath of the Bosnian War, the attack on the USS Cole, the events of the September 11, 2001 attacks and the subsequent War on Terrorism. In the wake of the above attacks the show experienced a boost in ratings and became a fixture on Nielsen's top 10.

Despite being a long running show with high audience ratings, JAG only attracted a modest share of media attention compared to other contemporary shows such as Alias, 24, and Sex and the City. One common explanation, mainly among conservatives, is that the established media has regarded the military in the post-Vietnam period with great amounts of contempt and disapproval.[citation needed] Others would argue the lack of attention is due to the show's standard melodramatic lawyer show themes, simply set in a military environment. Another explanation common among the fans is that JAG never received enough advertising by Paramount and CBS.[citation needed]

Some critics argue that JAG's basic premise portrayed a glorified view of the military, particularly the Navy, and failed to attract younger viewers as it continued through each of its 10 seasons.[citation needed]

In 2003, the series spawned the spin-off NCIS in a two-part episode in which Rabb is accused of the murder of a female officer. The two episodes focused on the NCIS team, with the JAG regulars as supporting characters. Whereas the JAG episodes were primarily oriented on courtroom drama, NCIS is more focused on the field criminal investigations. NCIS also follows a different storytelling format than JAG, emphasizing character humor more than its parent program.

To date, two characters from JAG have appeared on NCIS: Patrick Labyorteaux reprised his role of Bud Roberts in the episode "Hung Out to Dry", while recurring guest star Alicia Coppola appeared in her JAG role of Lt. Cmdr. Faith Coleman in several episodes. The core cast of NCIS remained unchanged between the pilot episodes and the full series, with the exception that the character of a female NCIS agent played by Robyn Lively was replaced by another character played by Sasha Alexander.

The two-part JAG episode in which the NCIS cast were introduced was later rebroadcast as a regular episode of NCIS, although it was not included in the subsequent Season 1 DVD box set release.

On September 1, 1998, the pilot episode of JAG was released on VHS in the U.S. It was distributed by Paramount Home Entertainment.

Community content is available under CC-BY-SA unless otherwise noted.
Advertisement